Twelve months ago Grace and I wrote, illustrated and published a book. The book came back from the printers two days before a special pre-launch party for family and friends at The Junk Bar. Artist Maureen Hansen launched our book and both Grace and I made speeches before Grace performed with her band, The Neon Signs and as an acoustic duo with her partner Jess. It was a packed small room filled with joy, music, mindfulness and love.

During 2016 we publicly launched our book “This Present Moment: An Art Therapy Journal” in three different states. First in Brisbane at Avid Reader (March 10), then Melbourne at Readings, Hawthorn (April 27) and Sydney at Gleebooks, Dulwich Hill (May 21). It was a long time coming. It was a thrilling ride. It recharged, refreshed, and emotionally energised us. It created connections and re-unions and filled our hearts with joy. Launching This Present Moment created a party rolling into three cities celebrating words and love and life. Grace, my illustrator, motivator, collaborator and cousin, shared the spotlight as we spoke of a bunch of ‘C words’ – connections, creativity, compassion and courage. These words were underscored with mindfulness, the deep river running through it all.

What is a launching your book like? It’s like a group hug! It’s like hiring out your favourite bookshop to throw a cheese and wine night with friends and family and a few fabulous strangers. With a lot of love and a few speeches thrown in. In fact that is literally what it has been. If you came along to one of the launches, I thank you. You made it special. You were there when we stepped out of our comfort zone and your support was vital.

Here’s my review of these outstanding moments.

Avid Reader in West End, my favourite and Brisbane’s best independent bookstore, was packed to capacity. There were 80 RSVPs, and many friendly faces. The theme of the night was love and courage. Grace and I were introduced by Madeleine, the events coordinator at Avid Reader. I spoke of the significance of the week – with what would have been my Mum and Dad’s 50th wedding anniversary and also my six year anniversary of that painful and devastating stage four cancer diagnosis.

It was both a sorrowful and uplifting night. I read the chapter on “love” and then on “courage”. At one stage my sister approached me with a box of tissues but I assured her – “I’m fine… but they might not be” – as I peered out to the audience.

This was the only bookstore launch attended by my darling heart Simon, who kept the home fires burning for the next two launches with our gorgeous kids Reuben and Ivy. I searched out his eyes from the podium. His gaze was steady and radiated safety and love – everything I needed to be able to speak into a microphone about such personal vulnerabilities. Grace followed with a beautiful meditation on mindfulness and a treaty to breathing. The line for book signing seemed wonderfully endless and we sold boxes of books on the night. Later Madeleine wrote, “Thanks so much for choosing Avid Reader for your book launch. It was such a great crowd and a wonderful moving event – we were delighted to be involved.” It was completely mutual Avid Reader!

The key message there was the great crowd. This was to be repeated in Melbourne and again in Sydney. These were rooms full of love.

The space at Readings in Hawthorn was cavernous. Readings is one of the largest independent single story booksellers in this current age of bookstores scaling back and closing down. In the weeks leading up to the book launch Readings had just won the ‘Best Bookstore in the World’ award. There were fifty-five people in the room and over thirty books sold on the night.

With most of my extended family living in Melbourne, there were more family and friends of family supporting me here than in Brisbane. This launch happened to coincide with my father’s family bi-annual reunion. Looking into the crowd of wonderful friends, former work colleagues and fabulous walk-ins, it meant so much to see the faces of my extended family there with my Mum and sister. It was a loving feeling of support that I know my father, who passed away in 2005, would have been ever so proud of. Books meant the world to him and I surely felt his presence with me that night.

The theme of the evening was creativity and courage. It was a wonderful and emotional night sprinkled with some comedy gold from Catherine Deveny who spoke of This Present Moment as a ‘spectacular book‘. Catherine had surprised me by accepting the invitation to MC the evening before. She burst in and worked magic, made our hearts sing, and then disappeared. I so wish I got to give her a hug and grab a photo! Her words were both hilarious and heartfelt.

A few of my highlights:

Catherine started off by recalling our Brisbane meeting at her Gunnas Masterclass;

“This bald woman had been standing in front of me, smiling non-stop for six hours. She said to me, “Yeah, I have a couple of kids and cancer… I’m going down, I have no hair”. I’d thought, ‘I’m sorry but the content of what you are saying does not match the optimism and the sparkle and the brightness emanating out of you!’

“Meg didn’t write a book to win prizes or for fame. She wrote a book to help, to be useful and to live a meaningful life. Leaving the world a better place than when she found it, because that is what she does. I’m so thrilled to have met Meg. This book is the most incredible gift for others as well as yourself.”

Next, This Present Moment was officially launched by one of Catherine’s prized Gunnas, author, survivor and friend, Julia Watson. It was pure happiness to have Julia accept my invitation to speak as I knew her own health was a roller coaster ride. However there she was with her four beautiful fairies and her fella, Gaz. Julia spoke with great warmth:

“I remember reading about Meg getting her diagnosis with a four month old baby on her lap… it was a hard read, I am a mum in this situation too, but she wrote about taking a breath… It is such a beautiful book and beautifully drawn. I was thinking about the huge themes in this book, it is not even close to being just a book for people with cancer. It is a book for everyone. She writes well about so many themes, especially courage which she has in spades. It is something that everyone can take into their lives to make them a better person.”

She spoke of her girls wanting to colour in the mandalas in This Present Moment and until now she had not let them, believing that the book should be honoured by keeping it pristine, but how that will now change. Her speech was heartfelt and emotionally charged. Something Grace and I will remember forever. Later after my own speech on courage Catherine admonished: “Are you f*&$% happy now Meg? You’ve made them all cry!”

It was a magical evening, with a wonderful group of supporters lining up to have their copy of This Present Moment signed. The next morning, I was honoured to read Julia Watson’s blog about This Present Moment. Her words radiated such goodness which demonstrate her own beautiful heart.

I have never read such supportive and loving words, this was the best gift from an extraordinary woman. Sadly we lost Julia this month to cancer. She had an incredible ability to draw together a tribe of people who loved her, many of them not ever meeting her, and she gifted us with her thoughts; her triumphs and her struggles, which provided rich insight into our own lives. She is deeply missed.

We launched at Gleebooks in Dulwich Hill on a Saturday afternoon in May during the Sydney Writers’ Festival. Most of the literary scene were at Walsh Bay listening to Gillian Triggs and Tim Flannery but we still managed to pull a crowd and a half!

At lunch time as my sister-in-law Anica and I were stocking up their tiny backroom with wine and cheese we were regretfully informed by the gorgeous red-headed Gleebooks ladies that Marrickville Council were working on the whole block, and had informed them that electricity would be out for the whole afternoon and into the next day! When I told Grace who had just flown in, we looked at each other, measuring up the idea of launching with no microphone to address the crowd, no cash register to take payment by Gleebooks staff, no ATM on that block accessible for those wanting to pay cash and doing it all in the dark! What else could be said but, “We’ve written a book about mindfulness… we can do this!”

Sydney rewarded us with a exceptional crowd of old friends, new friends, wonderful family and sweet strangers spilling out on to the street in the small Dulwich Hill shop. As the daytime light faded we took turns balancing on a library stool in the corner of the shop by the self-help section and listened to Rachel Taylor, a forever friend from school and a graduate from Australia’s first Masters in Positive Psychology, as she launched This Present Moment. She spoke of our long friendship, how mindfulness is the key to a more kinder, peaceful existence and about daring to begin and led us all in a mini group meditation. I spoke about compassion and community and how incredibly important it is to support yourself in creating, whether it be writing, music, cooking, gardening, building or art or more, but also just as crucial to support others in their endeavours. To attend the book launches, the art openings, the band performances, the plays. All of these creative pursuits strengthen our humanity and community. Grace had us all tune in to our breathing as we stood in the semi-darkness. 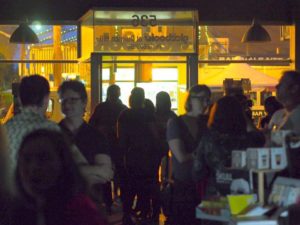 This last launch event in Sydney was a heightened moment of pure celebration – a source of light only from the lanterns Rachel, Grace and I held in a darkened room on a blacked-out street! Afterwards, we took the majority of the crowd down the road to Marrickville to celebrate into the evening at a Vietnamese Restaurant, continuing on to a very special evening with my besties, a birthday cake and bottles of wine in an AirBnB in Surry Hills.

Catherine Deveny, mentor, author and all round trailblazer, responded to my email after the last book launch in Sydney with these encouraging words:
“I hope you are loving yourself sick!”

Grace and I are loving ourselves sick! We created something and it has helped so many. Of course we know that this is fleeting. A book is read, it elevates the mood, it creates a pocket of calm… and then the moment moves on to the next. Life goes on. But I am thrilled I have walked this path and stood up and wrote and promoted my words and Grace’s pictures. I am proud of my achievements. Who else can tell your story but you?

I am so grateful for social media – how it connects us, and how it makes it easy to share your ideas with a far broader audience than ever before. Self-publishing your book and getting the word out to people – into people’s homes and minds and discussions over coffee or with loved ones – is so much easier! “There’s this book that might help you… check out this link…”  What a remarkable time we live in!

← Honouring JuliaReflections on 2016 →
Scroll To Top